I have lusted after these pencils ever since I saw two artists post test pictures using them, well before they were available to buy. I think it was the softness and subtlety of the colours that got me. Now at last I have them in my possession.

I will apologise now for the lack of video but I’m just a hobby artist not a professional and I’m not even sure how to set a video up let alone edit one. So here we go, a written review with a few pictures.

The Procolour pencils  arrived in the tin as shown above and yes I did order all 72 without trying them 😂 With its lid on the tin is quite solid but without, the metal bends about easily. Not a problem for me as I have pastel drawers that hold all my other pencils so these will join them in time but something to be aware of if you store yours in the original tin.

My pencils were purchased from the SAA and arrived with a free Derwent pad so I decided to try my new Derwent pencils on the new Derwent paper, well it was new to me anyway. 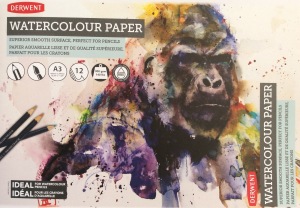 As you can probably see from the photo above, the pencils arrived sharpened but not sharp and being impatient I didn’t stop to sharpen any. I also knew I was going to work with them properly to test them and so it was fine, they could be sharpened then. Considering the pencils were blunt, on the whole they covered well. The paler ones covered less well than the darker ones but perhaps with less intensity of colour that’s to be expected. It should also be noted that it is a lot of the paler ones that have low light fastness so maybe they won’t get used much anyway. 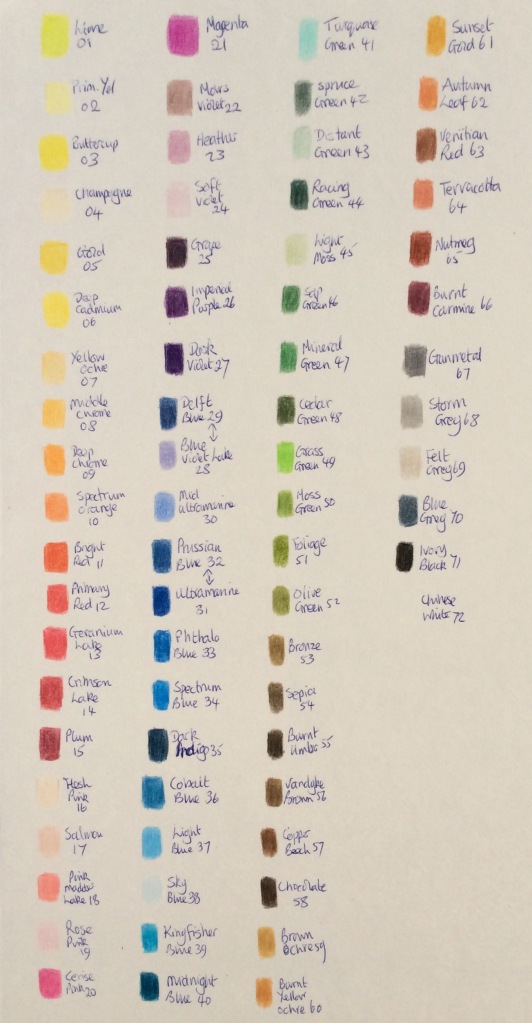 As you can see I just quickly tested each colour and made a note of its number and name alongside. I think this gives an idea of the colour range and the coverage. I didn’t blend, just coloured.

I was actually impressed with the range of greens. Nice to find some that I might use rather than having to mix mine all the time. One bright grass green but all the rest soft and more natural than other ranges carry.

Those eagle eyed amongst you may notice a couple of pencils in the wrong order. The first was due to whoever packed them getting two transposed, the second was me being distracted.

My next test was a Fuschia flower and I worked from a picture I took of one in my garden. This may not have been the best test due to the vibrancy of the fuschia and the muted subtle colours of the Procolour! My bad!

I began working on the reds with a small selection of Rose Pink, Yellow Ochre, Middle Chrome , Spectrum Orange, Bright Red, Geranium Lake, Crimson Lake and Primary Red. Once I began working I realised these were not enough and added Soft Violet, Cerise Pink, Plum, Champagne and Chinese White to the mix.

This is my first day’s work and so far this is my experience:

I gave up totally with Rose Pink, Champagne and Soft Violet as they barely showed up on the paper. This is probably no hardship though as, as previously stated,  these all have very low levels of lightfastness. They were though useful to blend with.  I also found that although I liked the paper and it took around 10 layers of the other colours with these three I actually broke the surface of the paper trying to get them to show. This is unusual for me as I always work with lots of light layers and am not especially heavy handed.
The colours really do lack the vibrancy of makes such as Polychromos or Luminance which I can hardly complain about as it is exactly the reason I was drawn to them in the first place. I can see them being a great addition to my current hoard of Coloursoft, Polychromos, Luminance and the odd Artists Pencils as they do bring a quality of colour that the others do not.

I want to do much more with these pencils and will post again when I have more to show. I was holding off posting this until I had more photos and had tried them mixed with Luminance, Polychromos and Derwent Coloursoft but then realised that some of you might be waiting to decide whether to purchase or not ………